The number of square feet per house are normally distributed with a population standard deviation of 137 square feet and an unknown population mean. A random sample of 19 houses is taken and results in a sample mean of 1350 square feet.

Find the margin of error for a 80% confidence interval for the population mean.

You may use a calculator or the common z values above.

Use the portion of the table above or a calculator. If you use a calculator, round your answer to three decimal places.
QUESTION 3

Use the table of common z-scores above.

QUESTION 5
A random sample of adults were asked whether they prefer reading an e-book over a printed book. The survey resulted in a sample proportion of p^=0.14, with a sampling standard deviation of σp^=0.02, who preferred reading an e-book.

Use the Empirical Rule to construct a 95% confidence interval for the true proportion of adults who prefer e-books.

Which of the following results in the null hypothesis μ=38 and alternative hypothesis μ<38?

The answer choices below represent different hypothesis tests. Which of the choices are left-tailed tests? Select all correct answers.

QUESTION 8
Determine the critical value or values for a one-mean z-test at the 1% significance level if the hypothesis test is right-tailed (Ha:μ>μ0).

According to a survey, the average American person watches TV for 3 hours per week. To test if the amount of TV in New York City is less than the national average, a researcher decides to do a hypothesis test, at a 1% significance level. She surveys 19 New Yorkers randomly and asks them about their amount of TV each week, on average. From the data, the sample mean time is 2.5 hours per week, and the sample standard deviation (s) is 0.9 hours.

What is the test statistic (t-value) of this one-mean hypothesis test (with σ unknown)?

The population standard deviation for the heights of dogs, in inches, in a city is 4.9 inches. If we want to be 80% confident that the sample mean is within 1 inch of the true population mean, what is the minimum sample size that can be taken? 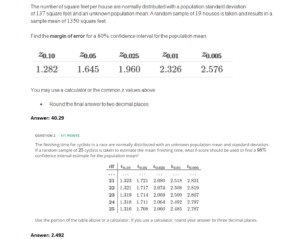