A statement of beliefs and values about human beings and their world is:

A set of logically interrelated concepts, statements, propositions, and definitions supported by data, testing, and verification to account for or characterize some phenomena is called:

The most abstract and general component of the structural hierarchy of nursing knowledge is called:

A theory that has been developed by a nurse to account for a phenomenon or concern related to nursing is:

The person, health, environment/situation, and nursing

The individual, groups, situations, and interests specific to nursing

Description, explanation, prediction, and prescription of an interrelationship of nursing

A group of theories that are broad in scope, complex, and provide broad and abstract views about nursing are called:

A group of theories that are more limited in scope, less abstract, reflect practice, and addresses a specific phenomenon are called:

A central construct in nursing would be:

What do the following theories written by Watson, Swanson, Duffy, Boykin & Schoenhofer, and Hall have in common?

They focus on adaptation

They focus on care and caring

They focus on comfort of the person/client

They focus on cultural care diversity and universality

An example of a nursing theory would be:

True or False: Concepts are words or phrases that refer to or describe a phenomenon.

Specifying actions or interventions to be provided

Allowing for variation in provision of care

Enabling professional nursing to practice in isolation of the healthcare team

Which type of nursing practice theory would a nurse be more likely to choose to manage specific situations or issues in the practice setting?

All of the above

None of the above

The nurse is caring for a client who is struggling with increased intracranial pressure. The nurse makes sure the client has water to drink, has voided recently, and the room is quiet and dark. Which theory is demonstrated here?

Focus on humanistic science of nursing

A nursing student in a graduate research course is exploring the reasons for using theory in nursing practice? Which statement represents the best answer(s) to this questions? Select all that apply.

Advancing the image of nursing in society

Giving direction to nurses to determine the effectiveness of interventions

A nurse is working with a client who has gained weight and experienced increased blood pressure and blood cholesterol levels in response to caring for his wife who has Alzheimer disease. The effect of the spouse’s illness on the client is most related to which central concept of nursing?

Environment typically refers to the external elements that affect the person; internal and external conditions that influence the organism; significant others with whom the person interacts; and an open system with boundaries that permit the exchange of matter, energy, and information with human beings. Person refers to a being composed of physical, intellectual, biochemical, and psychosocial needs; a human energy field; a holistic being in the world; an open system; an integrated whole; an adaptive system; and a being who is greater than the sum of his parts. Health is the ability to function independently; successful adaptation to life’s stressors; achievement of one’s full life potential; and unity of mind, body, and soul. Nursing is a science, an art, and a practice discipline and involves caring.

Theory of self-care and chronic illness

Which assertion best describes the current state of evidence-based practice (EBP) in nursing?

EBP in nursing has been fully realized and implemented.

EBP in nursing has been rejected in favor of other approaches.

EBP in nursing is waning in emphasis and was never fully implemented.

EBP in nursing is growing in emphasis, but its implementation is lagging behind. 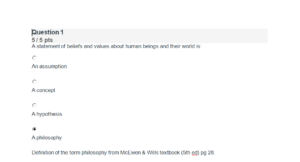