According to the lesson, what is the general somatic motor function associated with CN XI?

Movement of the supraspinatus and subscapularis

Movement of the trapezius and sternocleidomastoid

Movement of the masseter

Movement of the rhomboids and infraspinatus

The general somatic motor function of the Spinal Accessory nerve (CN XI) is movement of the trapezius and sternocleidomastoid muscles.

According to the lesson and the Bates’ Visual Guide video 16.15 Examining the Knees, to test the medial collateral ligament (MCL), perform the following assessment test?

The valgus stress test or medial stress test, is a test for damage to the medial collateral ligament of the knee. It involves placing the leg into extension, with one hand placed as a pivot on the knee. With the other hand placed upon the foot applying an abducting force, an attempt is then made to force the leg at the knee into valgus. If the knee is seen to open up on the medial side, this is indicative of medial collateral ligament damage and may also indicate capsular or cruciate ligament laxity

According to the lesson, sensation of the scalp, forehead, and nose is the function of which branch of CN V?

Sensation of the scalp, forehead and nose is a function of the ophthalmic branch of the trigeminal nerve (CN V).

According to the lesson, taste from the epiglottis region of the tongue is controlled by which CN?

Taste from epiglottis region of tongue is controlled by the SVS function of the Vagus nerve (CN X).

According to the Bates’ Visual Guide video 16.13 Examining the Hips, what is the name of the bony landmark located at the upper margin of the pelvis? 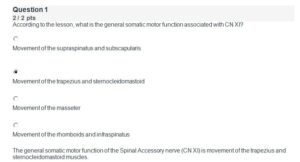 Click the Icon below to purchase the full solution @10