According to the U.S. Office of Minority Health, poor health outcomes among African Americans are attributed to which of the following?

The genetic predisposition for illness found among African Americans.

Discrimination, cultural barriers, and lack of access to health care.

The belief among African Americans that prayer is more powerful than drugs.

Poor compliance on the part of the African American patient.

The U.S. Office of Minority Health attributes the poor health outcomes for African Americans to, among other things, “discrimination, cultural barriers, and lack of access to health care”

Which of the following pharmacokinetic factors exhibits racial differences?

The pharmacokinetic factors that can be expected to potentially exhibit racial differences are (1) bioavailability for drugs that undergo gut or hepatic first-pass metabolism, (2) protein binding, (3) volume of distribution, (4) hepatic metabolism, and (5) renal tubular secretion. Absorption, filtration at the glomerulus, and passive tubular reabsorption would not be expected to exhibit such differences.

Warfarin resistance may be seen in patients with VCORC1 mutation, leading to which of the following?

Toxic levels of warfarin building up.

Coding-region mutations in VCORC1, encoding a subunit of the vitamin K epoxide reductase complex (the pharmacological target for the drug), were found to cause a rare syndrome of warfarin resistance. Subsequently, the variants in VCORC1 have been found to account for a much greater fraction of variability in warfarin response (21%) than do variations in CYP2C9 (6%)

Lead to toxic levels of rifampin (Rifadin) and must be monitored closely.

Cause nonspecific changes in drug metabolism.

Induce the metabolism of drugs, such as oral contraceptives, leading to therapeutic failure.

Cause toxic levels of drugs, such as oral contraceptives, when coadministered.

it takes less than 2 days for rifampin, which is a nonspecific CYP450 inducer with a shorter half-life, to decrease blood concentrations of many drugs to a subtherapeutic level and significantly increase the risk of therapeutic failure.

Alterations in drug metabolism among Asians may lead to which of the following?

The mean activity of CYP 2D6 extensive metabolizers is lower in Asians and is the molecular genetic basis for slower metabolism of antidepressants and neuroleptics in Asians. This difference in metabolism requires lower doses of these drugs.

The National Standards of Culturally and Linguistically Appropriate Services are required to be implemented in all:

Clinics that serve the poor.

National CLAS Standards were originally published in the Federal Registry in 2000 by the U.S. Office of Minority Health in response to a 1994 federal law mandating CLAS Standards for all organizations receiving federal funds, such as Medicaid and Medicare.

What is a prominent CYP enzyme in the body and what is it responsible for?

CYP2A4 – responsible for metabolism of a number of medications.

CYP2A4 – responsible for metabolism of a number of medications.

CYP3A4 – responsible for metabolism of a number of medications.

CYP2C4 – responsible for the excretion of a number of medications.

According to the National Standards of Culturally and Linguistically Appropriate Services, which of the following statements regarding an interpreter for healthcare is true?

The interpreter must be professionally trained as a medical interpreter.

The interpreter must be an employee of the organization.

The interpreter may be a bilingual nurse or other health-care provider.

The interpreter may be a bilingual family member.

These standards call for the provision of professional language assistance services for translation rather than ad hoc interpreters such as family and friends.

Which of the following is an excitatory amino acid (aka excitatory neurotransmitter)?

Glutamate is an excitatory NT

Inhibition of P-glycoprotein by a drug such as quinidine may lead to which of the following?

Decreased levels of a coadministered drug, such as digoxin, that requires P-glycoprotein for absorption and elimination.

Increased levels of a coadministered drug, such as digoxin, that requires P-glycoprotein for absorption and elimination. 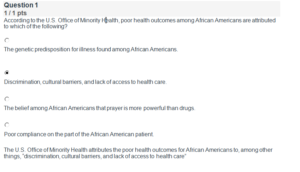 Please click the icon below to purchase full solution at $10